"Emily gets it -- pure and simple.
Lend an ear to the songs behind that sweet guitar, banjo or mandolin of hers."    —  guitar student

Emily Bonn performs original tunes about hollers, highways, riots and soda pop. Not content with borrowing from one style, she alters melodies from traditional cajun, bluegrass, country, and old-time music and makes them her own. As a former member of the critically acclaimed country band, The Whoreshoes, she shared stages with the legendary rockabilly singer, Wanda Jackson, Old Crow Medicine Show and Devil Makes Three. Emily honed her honky-tonk chops performing in San Francisco BART stations, Hardly Strictly Bluegrass Festival 2007, the mountains of Appalachia, beachtowns in SoCal to prisons in Belgium. Her new EP, "Songs from Alabama Street", features 7 new tunes and will be released in the Summer 2009. 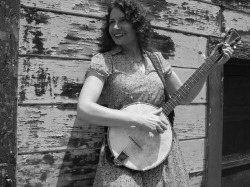